At the critical juncture of corona pandemic, the social contradictions are becoming more apparent. In this context  an ongoing controversy raging in Mysuru over the issue of land grab by politician Sa Ra Mahesh, a former MLA, is a pointer. It has taken a misogynist ugly turn. He challenged that if any of the charges are proved against him, he will take retirement from politics. But, if the former Deputy Commissioner (DC) Rohini Sindhuri is proved wrong, then she has to go back to Andhra Pradesh and 'confine to be a cook in her Kitchen, looking after children'. A sexist remark on IAS officer Rohini Sindhuri indeed! This former DC has instituted enquiry into the illegality pertaining to the land issue on the nexus of land mafia, politicians and MUDA (Mysuru Urban Development Authority) chairperson H.V. Rajeev and this is not acceptable by this nexus!

Misogynistic statement of MLA Sa.Ra. Mahesh facing land grabbing charges shows his patriarchal mindset. He talks of four walls of the kitchen for IAS officer Sindhuri but in reality, if charges are proved against him he could be confined to four walls of a prison!  Well! it's unfortunate that this MLA forgets his position as people's representative and indulges in shaming IAS officer using sexist abuse!

The Patriarchal society does not recognise women as equal citizen. Moreover, upright honest officers are constantly targeted and insulted on the basis of gender.

In fact, housework is highly skilled work, all along women's movement has been demanding its inclusion into GDP of the nation, thus claim not only recognition but also  social dignity for house work.

As Ms Sindhuri who was transferred recently says that the modus operandi of these nexus is to threaten & scare the officers so that action is not taken! He is insulting Ms. Rohini Sindhoori for her work which involves protection of public property from land sharks. She is a brave official of IAS cadet and deserves appreciation.

At the same time opposition party leaders, civil society groups are protesting against the illegal transfer of this DC. A signature campaign on social media has already collected more than 26,000 signatures in support of this DC. Workplace harassment faced by Ms. Sindhuri, from politician - officers- land shark nexus needs to be investigated.  Our people's representatives must read the constitution of India for gender discrimination on caste/sex/ race etc is unconstitutional, punishable and unacceptable in civil society.The  MLA should immediately resign for his misogynistic utterances. 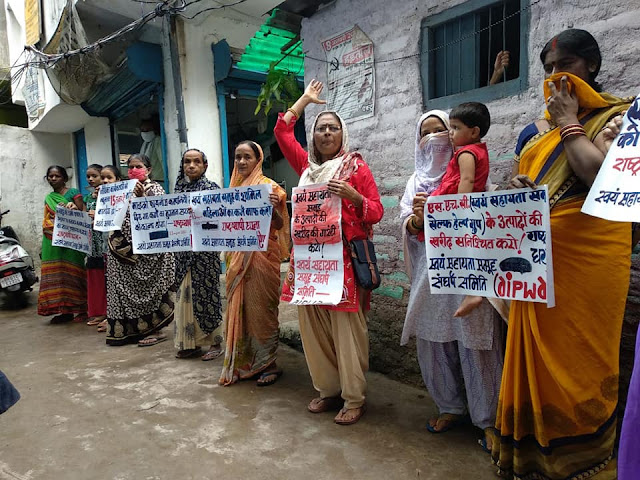 Lakhs of women across the country responded to AIPWA's call for Freedom from Debt Day on 13 August 2020 and came out on the streets with their demands which are as follows:  Freedom from Debt Day 13 August 2020 1. Waive group loans of all women in Self Help Groups. 2. Waive all Lockdown period installments of individual loans up to Rs 1 lakh, whether they are loans taken from government, micro-finance companies or private banks. 3. Stay debt collection on all small loans till 31 March 2021. 4. Ensure employment for women in Self Help Groups and procurement of their products. 5. Make loans up to Rs 1 lakh interest-free. 6. Make education loans interest-free. 7. Form a State level Regulatory Authority for group loans. 8. Interest rate for loans for self-employment up to Rs 10 lakhs should be 0-4%. 9. All small loans for which interest has been paid equal to or more than the loan amount should be closed. Lakhs of women across the country protested for the above demands wearing masks,
Read more