- December 27, 2012
(The Editorial of the Forthcoming Issue of Liberation Monthly Magazine is Published Here) 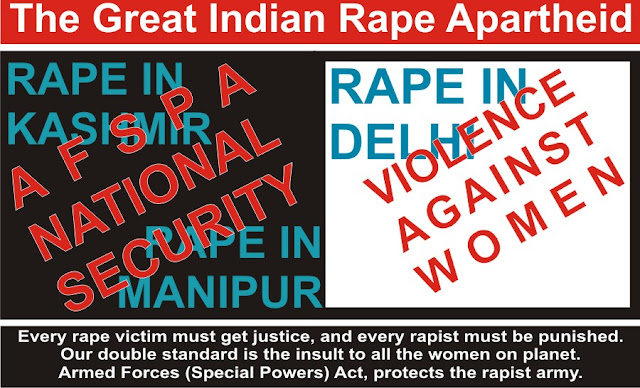 A young woman in India’s capital New Delhi is battling for life, after being brutally gang-raped and tortured in a moving bus. Her male companion was beaten up, and both were flung on the streets. The incident has triggered an outpouring of anger all over the country, against violence on women, its perpetrators, the culture that justifies it, and the authorities who tolerate it and allow it to flourish. Protest demonstrations, small and big, spontaneous and organized, are being held all around. The road to India’s Presidential House (Rashtrapati Bhawan) has, as we go to press, become a battleground for gender justice, with thousands of ordinary people braving water cannons, tear gas and batons to protest the inaction against sexual violence.

What is at the root of the alarming rise in gender violence and rape across the country? The answer requires that we take look within our society at the deep-seated misogyny, sexism, and hostility to women’s freedom. Why is it that women’s most basic freedoms and rights – to walk fearlessly on the street, take a bus or a train, go to school and college, go to work, wear clothes or choose friends or partners of one’s own choice – are all being met with a virulent backlash of patriarchal violence? There has been an alarming rise in sexual violence and barbaric killings which are misnamed ‘honour’ crimes.

Violence against women has flourished in a society and state which systematically justifies this violence and accuses women of ‘provoking’ it – with their clothes, movement, choices. Police officers, judges, elected representatives – all are in the habit of blaming women for the violence they face! And now, the anger and outrage against a system which fails to punish rapists but hands out patriarchal dos and donts to women has spilled out on the streets. 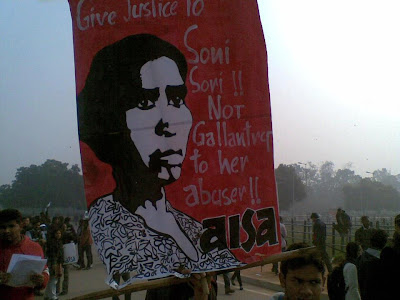 Incidents of rape in the country have increased by 791% since 1971: this, when only 50% of rapes are actually reported. But the conviction rates for rate dipped from 41% in 1971 to 27% in 2010. The low rates of conviction clearly point to shoddy and non-serious police investigation and collection of evidence; inordinate delays in prosecution and trial; and insensitivity of the police, judiciary, and the governments towards the needs of the rape survivor.

The outpouring of people from all walks of life is demanding swift and sure punishment for all rapists, and safety in public and private spaces alike, as a basic right for women. This public determination to resist gender inequality and violence is itself the best antidote to the patriarchal attitudes that breed violence against women.

Across the political spectrum, ruling class parties have proven to be alike in their attitude to sexual violence and women’s rights. BJP leaders are eloquent when they accuse the Congress for the growing rape graph in Delhi. But the BJP’s own attitude to women is most regressive. In BJP-ruled Karnataka, saffron mobs patronized by the Government go around attacking women who visit pubs or restaurants, wear jeans, or even have male classmates and friends at college. A woman BJP leader declared that she would ‘shoot a rapist in the head’ with no care for the law. But in NDA-ruled Bihar, when schoolteacher Rupam Pathak fought back against a BJP MLA whom she had accused of raping her, the BJP leaders and the Government came together to vilify her. Today, her complaint of rape is yet to be investigated while she has been convicted and sentenced to life imprisonment. 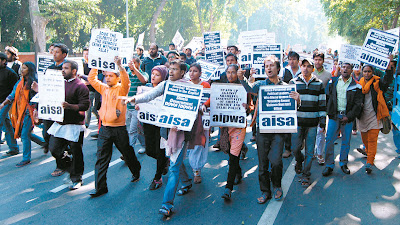 The courage of the rape survivor, and her will to resist and fight rape, has moved thousands of people to come on the streets to call for an end to sexual violence. Saluting her courage, we must struggle for sternest punishment for the rapists. We must also call for a variety of concrete measures to make justice the norm rather than the exception in cases of sexual violence. Violence against women is the norm, not the aberration, in patriarchal society. Resisting gender violence calls for resisting patriarchy – and asserting women’s right to lead a life unfettered by fear or by patriarchal regulations.
AIPWA Delhi Gangrape Kavita Krishnan Liberation Protests Sexual Harassment Sexual Violence