- December 22, 2012
Defend Women's Right to Freedom Without Fear!
Demand Swift and Sure Punishment for All Rapists!
Demand Special Session of Parliament to Pass Bills Against Sexual Assault, Including Marital, Custodial, Casteist and Communal Rape and Rape by Security Forces,
Sexual Harassment and 'Honour' Crimes! 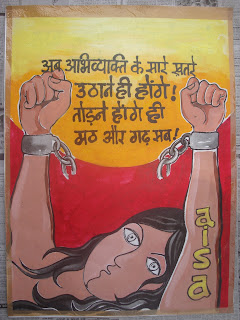 Only 26 in Every 100 Rapists are Punished – SHAME!
End Impunity – Ensure 100% Conviction Rate for Rapists!

Let’s Demand a Change at Every Level of the System:

Gender-Sensitive Laws, Swift and Sure Punishment: Hold a Special Session of Parliament without delay to enact comprehensive laws against Sexual Assault, including provisions for marital rape and rape by security forces, Sexual Harassment, and ‘Honour’ Crimes in consultation with the women’s movement.

Judiciary: Fast track courts for all cases of sexual violence, not only rape but sexual harassment too must be set up, with verdicts to be delivered within three months. Any judge who has made remarks or passed judgments which justify any violence on women and go against gender equality, must be made to quit.

Police: Gender sensitization training modules to be introduced in all police stations, including procedural instruction and training for dealing with rape complaints. Proper infrastructure and rape investigation kits to be made available in all police stations. Punitive measures including dismissal in case of failure to register cases of sexual harassment/rape.

Hospitals: A separate ward for medical and psychological care of rape victims and proper infrastructure for handling pathological-forensic investigations in hospitals.

Ending the Culture of Justifying Gender Violence: An end to ANY justification of sexual violence, ‘honour’ crimes or domestic violence. Those public servants including elected representatives or police officers or judges who indulge in victim-blaming must be made to quit.

Prevention and Education: Gender Equality be made an essential part of the school curriculum, to be drawn up in national consultation with women’s movement activists in the field. The aim should be to challenge misogyny, patriarchal attitudes, and hostility to women’s freedom and rights, head-on, on a war-footing.