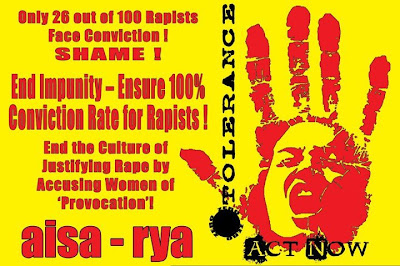 If the brutal gang-rape of a 23-year old paramedical student in a moving Delhi bus on the night of 16 December had shocked the entire country, the unprecedented protests that have erupted since then, most prominently in Delhi itself, have come as a most encouraging sign of a growing democratic awakening and assertion in the country. The year 2012 could not possibly end on a more rousing note. Never before did Delhi, or for that matter any other Indian metropolis, see a protest of this magnitude and intensity on an issue of gender violence. The protests have been remarkable for the scale and range of popular participation - mostly spontaneous but also unmistakably aided and encouraged by the spirited participation of organised progressive groups of students, women and workers - as well as for the bold display of courage and determination in the face of water cannons, tear-gas shells, repeated raining of lathis, and above all, the monumental apathy and arrogance of the rulers.

The protests were necessary for the most deeply felt collective anger that was voiced so powerfully and creatively. More than the demands raised or ideas mooted to combat the ugly patriarchal evil of rape, the very fact that thousands came out to protest and demand justice was itself the biggest deterrent that can ever be thought of against sexual violence. The ideas voiced were no less urgent – the calls for fast-track courts to ensure speedy trial of rape cases and delivery of justice, or a special session of Parliament to discuss and fight the shame of sexual violence faced by Indian women in their domestic domain as well as public realm, are all immensely important.

The protests have clearly been a huge boost to the confidence of the people and certainly a great inspiration for every kind of progressive political imagination. Many fetters on free assembly of people that had been systematically enforced over the last two decades of neo-liberal governance were broken in just two days of spirited and courageous mass protests on December 22-23. November 25, 1992 was the last occasion when the Boat Club lawns had witnessed a massive public protest – it was the first powerful and united rally of Left-led trade unions against the assault of the policies of liberalisation and privatisation – before a ban was announced declaring that area out of bounds for people’s protests. After two decades of insulation from public assembly, the Raj Path – the road that runs from the India Gate to the Rashtrapati Bhawan – regained its lost glory by emerging as the key battleground for justice and democracy.

Faced with a mass protest of this magnitude, the least that any responsive elected government must do is to reach out to the protestors, listen to their voice and provide a responsible answer. But on December 22-23, the whole world saw how miserably the much-touted largest democracy of the world lacked this basic spirit of democratic governance. Neither the leaders of the government nor the leaders of the ruling party had the decency or courage to come and face the protesting people. The Delhi Chief Minister, the only woman chief minister in the country to have been re-elected three times in a row, tells a TV interviewer that she lacked the courage to even see the victim who was battling for her life. The Prime Minister belatedly delivers a most unconvincing televised address that fails to answer the fundamental issues or inspire any confidence in the people.

And the Home Minister drops chilling hints of more repression to come in a most casual manner in a TV interview, questioning the protestors’ right and defending the government’s indefensible attitude. According to the Home Minister, the protestors had no reason or right to continue with the protests when ‘Soniaji’ had already met a delegation! What monumental audacity and shameless sycophancy on the part of the person who is supposedly in charge of the home affairs of the country! Sonia Gandhi’s meeting with the so-called ‘delegation’ remains entirely shrouded in mystery – the thousands of people protesting in the face of water cannons in a chilly December afternoon had no idea about the credentials of the delegation and whatever transpired in its secret meeting with the Congress president. How on earth could the Home Minister expect the protests to end simply because a chosen few had the privilege of meeting the Congress chief!

When asked why no responsible senior functionary of the government met the protestors, the Home Minister had the cheek to say that no government could afford to set such a dangerous precedent. And then he adduced the most chilling logic – ‘if we go and talk to these people today, tomorrow when hundred adivasis are killed in Maharashtra or Chhattisgarh, we will be expected to go there’! Here is the most candid confession from the horse’s mouth of how brutal repression of the poor and marginalised is treated as a taken-for-granted fact of everyday life by the state, and any form of accountability for state atrocities in such contexts is dismissed as ridiculous, even as every single mass protest is increasingly viewed by the government through the dangerous lens of Operation Greenhunt.

Some commentators have asked why issues of sexual violence in rural India or anywhere beyond Delhi where rape is used as a weapon of feudal oppression, communal violence or state repression do not get the kind of ‘middle class’ attention that this particular case has attracted. Well, there is always the proverbial last straw on the camel’s back or the last nail in a coffin. It is wrong to presume that the people outraged by this specific incident have all been blind to other cases of sexual violence. Mass protests in the capital of India have already come a long way from the candle-light vigils triggered by the murder of Jessica Lal to the street battles with the police on the issue of brutal gang-rape of an unknown 23-year-old student. It will be the height of intellectual arrogance and sheer snobbery and sterile political pedantry to dismiss or devalue the protests as concerns of an isolated urban middle class and try and pit them against issues of caste oppression, communal violence or state repression.

The need of the hour is not to pit one case of sexual violence against another, but to see and show the hidden links and work for an unstoppable and comprehensive democratic awakening. The rulers are already revealing the links – we must grasp them and storm all bastions of oppression and win every battle for democracy. The protests of December 2012 have already provided a great spark that the cause of genuine freedom and democracy needs at this hour of all-round crisis and concerted state-corporate, feudal-communal and patriarchal assault on the dignity, livelihood and democratic rights of large sections of the Indian people.