The Movement for Women’s Right to Fearless Freedom is Invincible 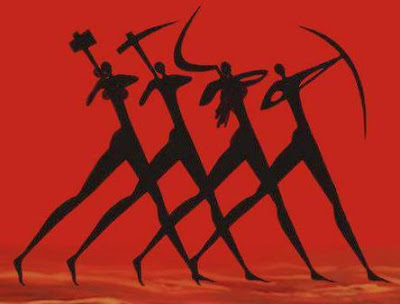 Not surprisingly, the sustained nationwide movement for gender justice has evoked an angry misogynist backlash, with none other than RSS supremo Mohan Bhagwat taking the lead and a bizarre assortment of patriarchal forces joining the bandwagon.

The chief of the most reactionary bastion of male chauvinism fired two salvos in quick succession. First he said that crimes against women happen in India, not in Bharat. Apart from being grossly incorrect in point of fact, this gives out the impression that ‘Western culture’ in cities is responsible for the crimes and the solution lies in restoration of traditional patriarchal values. A couple of days later he refurbished his position by saying that marriage is a contract that lasts as long as the wife honours it by taking good care of the husband and the household. VHP’s Ashok Singhal lost no time in taking the cue from Bhagwat and blaming the 'western model' of lifestyle in cities, even as Madhya Pradesh minister Babulal Gaur upped the ante by saying that in our culture wives revere husbands as parmeshwar (the supreme god) and therefore marriages are more than mere contracts. Meanwhile Kailash Vijayvargiya, BJP MP from Madhya Pradesh, came forward with another gem. Even Sita was caught by Ravan, he quipped, when she crossed the Lakshman Rekha. The message was loud and clear: woman in modern India must keep within the limits set by their male protectors and guardians, or else face the consequences. Considered together, such statements clearly reveal how the Sangh Parivar proposes to go about nation-building – constructing the ‘Hindu Rashtra’ to be more precise – on a medieval patriarchal foundation.

Even more obnoxious and intolerable was 'Godman' Asaram Bapu’s declaration that the Delhi gang-rape victim was equally to blame for the horrific incident. She should not have boarded the bus "at midnight" in the first place, Bapu said, and even when she did she should have addressed the rapists as brothers, fallen at their feet and prayed for protecting her izzat. In his speech to his followers he also came out against stringent anti-rape laws.

Misogynist attitudes have always been a central theme of Hindutva, indeed of all dominant ideologies. In normal circumstances, however, the protagonists take care to try and give somewhat sophisticated expressions to their obscurantist views. But this time around they lost their cool when the current movement, instead of dying down as they had expected, continued and went beyond the immediate demand of justice for the Delhi victim and punishment for the culprits – when it developed into a broader one fighting for a thorough overhaul of gender relations in society and polity, when demands like hundred per cent conviction of rapists and suspension of all MLAs and MPs charged for offences like rape began to be raised. The whole political structure of patriarchy was shaken, and they could wait no more. The hissing serpents came out, one after the other, across the political spectrum. Among the latest of their fraternity were the notorious khap panchayats opposing tightened anti-rape laws and NDA convenor Sharad Jadav praising their role in ‘protecting’ women; Trinamool Congress MP Kakoli Ghoshdastidar depicting the Park Street (Kolkata) survivor and fighter for justice as a sex worker and CPI (M) MLA Anisur Rehman passing obscene comments against the CM of West Bengal; Andhra Pradesh Congress chief Botsa Satyanarayana who made blatant misogynist remarks recently and of course, Congress MP Abhijeet Mukherjee who portrayed women protesters in Delhi in bad light a few days ago – the list is endless.

Patriarchal attitudes have always thrived in symbiosis with all sorts of reactionary parochial prejudices. The single point about the Delhi gang-rape which Maharashtrian mafia leader Raj Thackeray found particularly important was that the rapists according to him were Biharis, the principal target of his chauvinist hate campaign. But Raj is certainly not alone in trying to make political scores out of such tragic and shameful incidents. It was not long ago that Manmohan Singh and Sheila Dixit put the blame for the rising crime graph in the national capital region on the hapless urban poor, calling them outsiders or by other names, and describing them as a criminal community. That does not, of course, prevent the Congress from taking a holier-than-thou attitude now.

While the ugly comments of the sexist 'neta's were vitiating the atmosphere all over the country, in refreshing contrast a whiff of fresh breeze blew in from a village in Ballia in UP, carrying with it a solemn pledge of fighting forward, a bold message of hope and change. Speaking on behalf of the bereaved family, the brave father of the Delhi braveheart told a British tabloid that he was proud of his daughter. She did nothing to be ashamed of and he wanted the world to know her name, so other women could draw inspiration from her courageous battle.

Well, already they are, and not only in India. Encouraged by the rallies and marches staged here, demonstrations have also been held in Nepal, Sri Lanka, Pakistan, Bangladesh, UK and US. There is no power on earth that can stop the movement against gender oppression, discrimination and violence.
AIPWA AISA Delhi Gangrape Dipankar Bhattacharya Kavita Krishnan ML Update Nirbhaya Protests Rape Sexual Violence