‘Freedom Parade’ to Reclaim the Republic - A Report 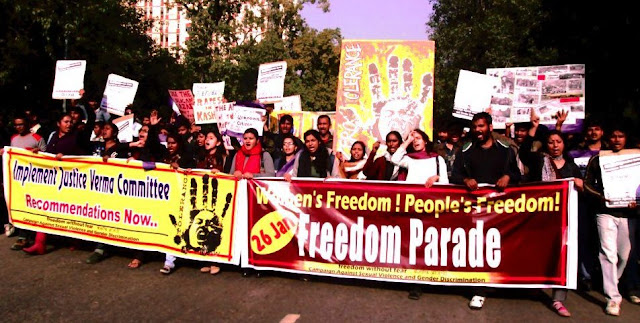 On Republic Day this year, thousands marched in Delhi in a ‘Freedom Parade’ to assert women’s freedom and people’s freedom. The Freedom Parade, taking place not long after the Republic Day parade ended, was held under the banner of the ‘Freedom Without Fear’ campaign, launched to take forward the ongoing movement against sexual violence. Around 2000 protestors, including students and teachers from Delhi University, JNU, Jamia Millia Islamia, women’s groups and citizens from different parts of the city, marched in the procession from Mandi House to Jantar Mantar to ‘Reclaim the Republic’.

In the weeks preceding Republic Day, young protesters against sexual violence had been branded as ‘dented and painted’ and as a ‘mob’. That is why they marched to assert that the Republic comprises of the ‘public’, whose role is not just to be spectators; to realise the true spirit and the potential of the constitution, you need an active, protesting, dissenting ‘public’.

When the parade reached Jantar Mantar, a massive public meeting was held. Sucheta De, former JNUSU President and AISA leader, conducted the proceedings. Addressing the gathering, Kavita Krishnan, secretary All India Progressive Women’s Association (AIPWA) talked about the stories of the various people named in the placards the protestors were carrying. She said that the Government was afraid of the Justice Verma Commission report: and this is a sure sign that the Report is a victory for the movement. She called upon people to stop fearing the freedom of others. Hailing the slogan of ‘naari mukti sabki mukti zindabad’ (women’s freedom, everyone’s freedom Long Live), she said that the subordination of women was intimately linked to the subordination of others. Men cannot be free as long as women are held in fear and unfreedom. None of us should fear the right of women, the dalits, adivasis, the religious minorities, the people of Kashmir and the North East, and the sexual minorities, to seek freedom from discrimination, indignity, and violence, because in their freedom lies the freedom of us all.

The protestors condemned the President of India for awarding a gallantry award to yet another rapist in uniform: SP Kalluri, accused of raping an adivasi woman in custody in Chhattisgarh. Young girls presented ‘Mardangi Maryada medals’ and Laxmanrekha Medals’ to people who have been making atrocious, sexist, misogynist, victim-blaming statements, and who have been accused of rape. These medals were presented to photographs of Abhijeet Mukherjee, Mohan Bhagwat, Asaram Bapu, Kailash Vijayvargiya, Abu Azmi, Ankit Garg and Botsa Satyanarayana.

The protestors demanded the immediate implementation of Justice Verma Commission report, and demanded that the government and various political parties break their silence on the report.

On 24 January, a massive rally for women’s freedom and dignity was held in Patna, organised mainly by AIPWA along with AISA and RYA. Around 3000 women from rural areas of Bihar blockaded the road at Kargil Chowk, and held a mass meeting, where they demanded the implementation of the Justice Verma Committee Report, and condemned the UPA Government and Bihar’s NDA Government for protecting the forces unleashing violence against women.

On 25 January, a mass meeting called by AIPWA was held at Nagbhushan Bhawan, Bhubaneshwar. The meeting was addressed by AIPWA and CPI(ML) leaders.

On 25 January, AISA and AIPWA held a march in Varanasi, against sexual violence, and specifically protesting sexual harassment against women students of the Banaras Hindu University (BHU) (see report below).

On 26 January, AISA and AIPWA held a women’s freedom parade parallel with the official parade in Delhi. Demanding ‘Freedom Without Fear and Without Conditions,’ the parade with around 150 participants began from Ramlila Maidan and marched through various streets before reaching Gandhi Chowk. The mass meeting held there was addressed by AISA leader Kamini Pokhriyal, Chanchal Bora and Manisha, AIPWA’s Sheela Punetha, Pushpa Martoliya and others.

Protest at London Against Sexual Violence on Republic Day

Over 80 people gathered on Republic Day at the Indian High Commission in London to express their solidarity with the women's movement in India which poured onto the streets after the brutal gang rape of a 23 year old woman student on a bus in Delhi. Protesters voiced their outrage at the scale of state violence and rape faced by women in India.

The slogans demanded justice for Soni Sori, an indigenous woman sexually assaulted by the Indian police where her torturer was given a police medal for gallantry on India’s Republic Day a year ago. There was also a call for justice for Aasiya Jan and Nilofer Jan, two Kashmiri women raped and murdered by the Central Reserve Police force in 2009. The placards demanded implementation of Justice Verma Commission’s recommendation of immediately removing immunity from prosecution for sexual crimes - the army, paramilitaries and the police. They also stated that ‘the SP of Dantewada Ankit Garg, responsible for the sexual torture of Soni Sori, must be stripped of the presidential gallantry award and punished’, along with SRP Kalluri another Chhattisgarh police officer responsible for rape and torture who was honoured this Republic Day.

A number of groups came together - South Asia Solidarity Group, the Justice for Soni Sori group, the Indian Workers Association and Imkaan calling for an end to state violence and rape. Slogans included ‘Indian president – stop honouring rape’, ‘who raped Nilofer Jehan – Indian military and Indian state’, ‘who raped Soni Sori – Indian police and India state’. Their voices of protest joined by Newham Asian Women’s project, Southall Black Sisters, Older Feminist Network, Iranian and Afghanistan Women’s group and others were heard by a number of passers-by who stopped to read the placards and listen to the slogans. There were many new faces not usually seen at these kinds of public events. Two young women with a placard saying ‘don’t tell us not to go out - tell your sons not to rape’ had taken the slogan from the protests in India ‘Don’t teach me what to wear – teach your sons not to rape’, and made it their own.

Writer and actor Meera Syal addressed the gathering and stated ‘India claims to be a new superpower but look at the way it treats women. More important than being the best in IT is changing the way women are treated’. There were calls for keeping up the pressure and organising more events for protesting sexual violence against women which is taking place in India and Britain.