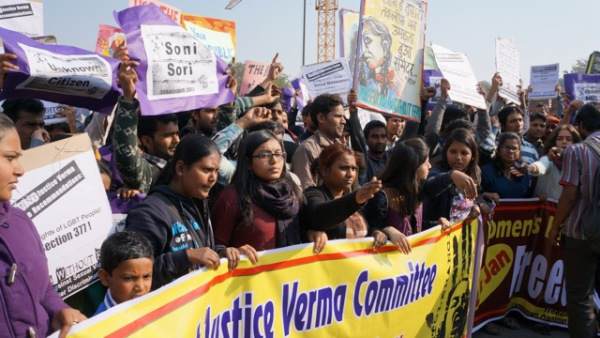 The Justice Verma report radically redefined the way in which sexual violence is understood, because it firmly called for safeguarding women’s autonomy – including her sexual autonomy. This means that sexual violence should be understood as any sexual contact that is forced on a woman unless she has explicitly said or indicated ‘Yes’ to it. It is irrelevant whether she is married or not, or whether the perpetrator is a policeman, judge, magistrate, public servant, politician, or army officer: the accused/perpetrator cannot enjoy impunity in any case! The ordinance completely mocks this basic principle.

The ordinance is nothing but the Govt’s old discredited Criminal Law Amendment Bill 2012 with some extra window dressing. What’s WRONG with this ordinance?

The ordnance makes of mockery of all those recommendations of the Justice Verma committee that actually reflected the idea of protecting women's autonomy: be it a 16-year old girl who has sexual contact with her boyfriend to a married woman who says no to her husband, the ordnance just fails to accept a woman's own autonomy and consent as crucial to deciding if rape occurred or not! The ordnance continues to make excuses for certain powerful perpetrators of rape: it continues to ensure that certain institutions of power (marriage/police/army/judges/magistrates/public servants/politicians) remain protected from prosecution for rape.
We refuse to accept this eyewash! We demand full implementation of the Justice Verma Committee Report!

We can defeat the Govt's ploy to dilute and subvert the JVC recommendations only by being on the streets and continuing to fight!
Bekhauf Azaadi has called for a protest against the ordinance and demanding implementation of JVC on 4 Feb at 2 pm at Jantar Mantar. Please do join. There will be several other protest and campaign actions in the days to come, please do join each of them, and make sure the Govt does not get away with betraying our movement and the JVC Report.