No to Ordinance That Dilutes and Subverts Justice Verma Recommendations 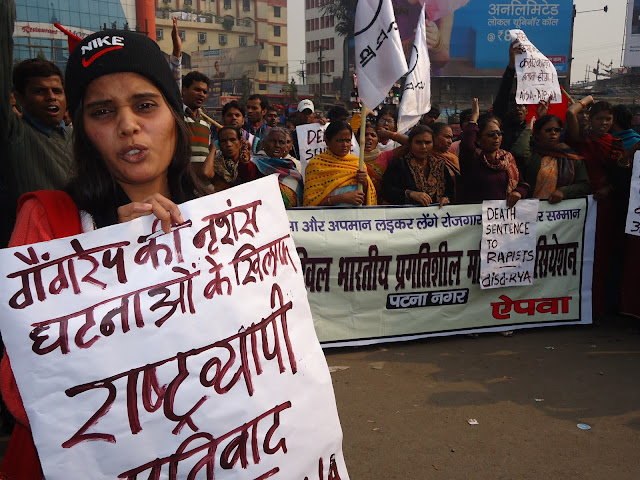 The ordinance on sexual violence laws introduced by the UPA Government is a mockery of the month-and-a-half long continuing struggle demanding justice and freedom for women. Instead of implementing the Justice Verma Committee recommendations, the Government has brought in an ordinance that undermines the spirit and thrust of the Committee’s Report and its key recommendations.

Any ordinance is promulgated as an emergency measure. Women live in a daily state of ‘emergency’, their freedom curbed by the fear of sexual violence. But it is not that emergency which has prompted the Government’s ordinance. Rather, for the Government, the ‘emergency’ was the desperate need to somehow dilute and divert the Justice Verma recommendations, which reflected the aims and demands of the ongoing countrywide movement.

The ordinance expands the definition of sexual violence, recognises stalking, acid-throwing, and voyeurism, and introduces more severe punishments. But on a range of key questions, the ordinance goes against women’s autonomy and rights, and avoids ending impunity of powerful rapists, and ensuring accountability of police and other institutions.

The ordinance makes the perpetrator of rape ‘gender-neural’: i.e both men and women can be accused of rape. This will mean that if a woman files a rape complaint against a man, he can file a counter-complaint of rape against her! What a joke with women of our country!

The ordinance does not respect the right of young girls between the age of 16-18 to have sexual contact by their consent with male friends of a similar age. Instead, by automatically branding all such sexual contact as ‘rape’, the ordinance will strengthen the khap panchayats and moral policing brigades who seek to curb the freedom of young people of that age.

The ordinance legitimises marital rape and strengthens the idea of the wife as the ‘sexual property’ of the husband. It also retains the provision of lesser sentence (minimum sentence of 2 years) for a husband who rapes a legally separated wife! Therefore, even if a wife has taken the pains to separate herself from an abusive husband, the law will make excuses for him if he rapes her. The exclusion of marital rape and the lesser sentence for rape of a separated wife are shocking violations of the principle that the relationship or prior relationship of the accused with the victim will not be grounds to undermine the rape complaint or show leniency.

The ordinance continues to protect the powerful. There are no provisions against candidates charge sheeted for sexual violence. The ordinance retains the requirement of ‘prior permission’ for prosecution of public servants/judges/magistrates/army officers. So, no Ruchika Girotra or Soni Sori (molested by a police officer), Geetika Sharma or Rupam Pathak (raped by MLAs), or Thangjam Manorama (raped by army personnel) can expect justice under this ordinance! Senior police/army officers will not be investigated or punished for custodial rapes that are committed at their orders or with their knowledge in custody by their junior officers. Sexual violence during caste or communal massacres and against of SC/ST women have not been recognised as ‘aggravated sexual assault.’

To ensure accountability of the police, Justice Verma has stipulated a punishment of 5 years imprisonment for failure to register an FIR or biased investigation, in order to instil fear of consequence in police personnel who fail to abide by the law. But the ordinance dilutes this to a mere 1 year, and so clearly sends a message of leniency out to the police.

The ordinance retains patriarchal language, continuing to call molestation as ‘outraging modesty.’ Not only does the ordinance fail to ban the demeaning and sexist two-finger test, and its definition of rape actually legitimises the two-finger test, in the name of ‘penetration for medical purposes.’

The shoddily-drafted and anti-women ordinance, promulgated by stealth before any citizen of the country had even seen it, is a disservice to the painstakingly prepared Justice Verma Report that adopted a thoroughly democratic and rigorous process, and came up with a report showed the way to promoting women’s freedom, rights, and safety.

Meanwhile, the BJP, which is quite comfortable with the anti-women provisions in the ordinance, is now trying to make political capital by naming a museum after the Delhi braveheart. A leader of the same BJP had, when the girl was fighting bravely to live, insulted her by calling her a ‘zinda laash’ (walking corpse); the BJP defended the RSS chief when he implicitly blamed the girl for inviting rape, by saying ‘rapes happen in westernised India, not Bharat’; a BJP leader of MP justified rape as the inevitable consequence of crossing ‘Laxman Rekha’; and recently another BJP leader of MP said that protecting girls was their parents’ responsibility, not the Government’s. For this party that openly encourages the culture of victim-blaming for rape, to try and cash in on the braveheart’s name, is a shame.

It is a triumph of the ongoing movement, that it has kept the issue of women’s freedom and safety alive for a month and a half. The movement has spiritedly resisted the eyewash of an ordinance, and will continue to agitate for full implementation of the Justice Verma Committee Report. In the coming Budget Session of the Parliament, fighting young people and women will certainly intensify their struggle, and keep a close watch on Parliament, to force it to implement the Justice Verma recommendations!