Are Our Lawmakers Ready to Listen to the Voice of the Movement Against Sexual Violence? 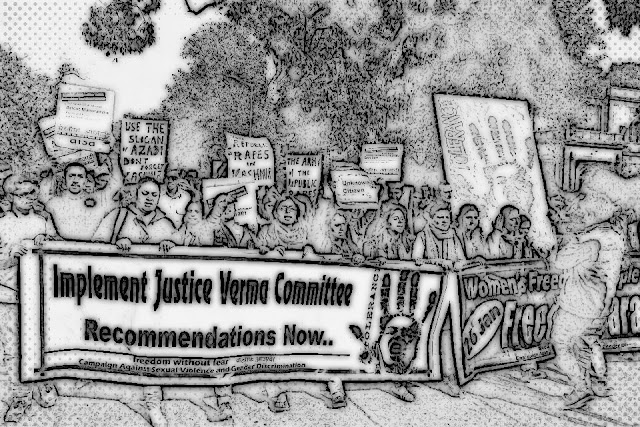 NO to Government’s Eyewash Ordinance!

Parliament Must Enact a Law Against Rape and Sexual Violence

Based on Justice Verma Recommendations!

Budgetary allocations for rape crisis centres, rehabilitation and compensation for survivors of rape and acid attacks

1) We want rape-accused MPs, starting with Deputy Speaker of Rajya Sabha PJ Kurien to resign from Parliament. We have had enough of MPs remarks branding women as ‘dented and painted’ and branding rape survivors as ‘child prostitutes’ or as ‘zinda laash.’ We say to them: please stop worrying about women’s morality, and ‘honour’ – and enact an anti-rape law that respects women’s autonomy and rights; that gets rid of protective shields for powerful accused; that ensures accountability of the police.

2) We are shocked that the ordinance has introduced ‘gender neutrality for perpetrator’ in the law for rape and sexual assault, making it possible for men to accuse women of rape. We do not want this joke to be played on women when they are demanding justice! We say NO to gender-neutrality of the accused in the rape/sexual assault law.

3) We are dismayed by the ordinance’s move to automatically brand consensual sexual contact between young people between the ages of 16-18 as ‘sexual assault’. We, the young people of the country, do not want a law that can brand a teenage boy as a sexual offender for holding hands with a girl of his own age. We do not want a law that strengthens the hands of the khap panchayats and the moral-policing brigades that terrorise young people who befriend each other. Our reason is outraged by the fact that the ordinance continues to refer to violence against women as outraging or insulting ‘modesty’. It is appalling that the law of the land expects women to prove their ‘modesty’ in order to merit justice in cases of sexual violence! We demand deletion of such patriarchal vocabulary from the law.

4) In memory of the tremendous and tragic injustice done to Ruchika Girotra, to Thangjam Manorama, to Geetika Sharma and Rupam Pathak, we want an end to protective shields for powerful people accused of rape. There should be no need to seek government permission to prosecute public servants (MPs, MLAs, police officers) and army officers who are accused of rape or sexual assault. Let the Court, not Governments, decide if a complaint of rape has merit or is false/motivated. Repeal the AFSPA to ensure that army officers accused of rape cannot hide behind AFSPA and claim immunity, as Manorama’s rapists and killers have done since 2004.

5) We demand the principle of command responsibility in cases of custodial rape and sexual assault by police or army. Superior officers who knowingly allow their junior officers to rape, or who, having known of such a rape, fail to initiate action against the errant officers, must be held accountable and punishable. Only then can we hope to do justice to terrible crimes like the custodial sexual torture of Soni Sori or the mass rape at Kunan Poshpora. We demand that police personnel who fail to file FIRs or follow the law in matters of investigation, be jailed for 5 years, and such crimes should be made cognizable and non-bailable.

9) We demand budgetary allocations for rape crisis centres, safe houses for women, more judges and courts, forensic examination facilities, rehabilitation and compensation for survivors of rape and acid attacks. And if the Government pleads ‘fund crunch’, we would like to suggest that this time, if they avoid handing out lakhs of crores of rupees as tax waivers to the super-rich and big corporations, and avoid buying needlessly expensive defence equipment to benefit the corrupt, there should be plenty of funds left over to spend to make women safer!

10) We support the 2-day all-India workers’ strike, and join women workers in demanding a law against sexual harassment at the workplace.