Onwards to People’s Watch Over Parliament... For Implementation of Justice Verma Recommendations!

Are Our Lawmakers Ready to Listen to the Voice of the Movement Against Sexual Violence?

Onwards to People’s Watch Over Parliament, Starting on February 21, 1st Day of the Budget Session, at Parliament Street 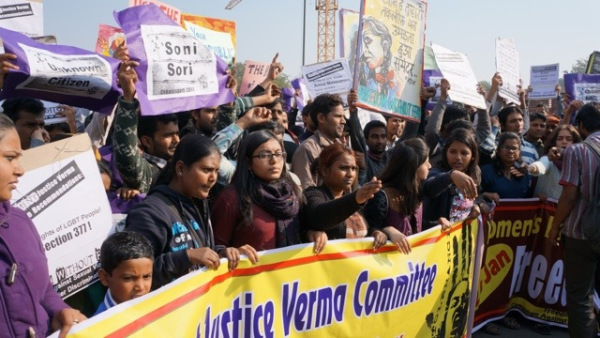 The horrific gang-rape of December 16 sparked off a massive movement that brought us all on the streets to say ‘Enough is Enough’ and demand action to ensure women’s freedom from sexual violence and gender discrimination. In keeping with the spirit of the movement, the Justice Verma Committee came out with a path-breaking Report, with recommendations that, if implemented, would truly make women less vulnerable to violence. But, instead of implementing the Justice Verma Report, the Government has instead chosen to pass an ordinance that completely subverts the substance and spirit of the Verma recommendations!

Does the ordinance answer the demands we were raising, of freedom and safety for women? No, instead, it mocks them!

The ordinance, going AGAINST Justice Verma’s recommendations, says that both men and women can be accused of sexual assault and rape! Is this not a cruel joke with the women of the country? Whenever a woman files a complaint of rape, the accused will file a counter-complaint of rape against her!
According to the ordinance, any sexual contact, including touching, between young people of the age 16-18 will automatically be termed ‘sexual assault’, even if it is by mutual consent among friends! This is a law that can help the khap panchayats and moral police brigades that terrorise young girls and boys, not women! Again, this is the exact opposite of what Justice Verma had recommended.

The ordinance justifies and legalises marital rape. Even if a wife separates legally from her husband, the husband will get a lenient (2 year) punishment if he rapes her! Justice Verma’s report had said that any sexual contact that is against a woman’s consent, is sexual violence – regardless of whether the relationship of the accused to the woman, even if he is a boyfriend or husband. A wife is not the property of her husband, she still has the right to say ‘no’ to sexual contact with him. If Justice Verma’s recommendations were implemented, it would make marriages more democratic, based on love and equality rather than on the husband’s power over the wife. Strangely, under the ordinance does not allow wives to accuse husbands of sexual assault – but husbands can file cases of sexual assault against their wives, and theoretically, wives can even get the life sentence or death penalty for ‘repeat offences’!

It rejects Justice Verma’s recommendation that politicians against whom a charge sheet has been filed for sexual violence, be prevented from contesting elections; that no government permission be required to prosecute judges/magistrates/public servants/army officers who are accused of sexual violence. Justice Verma’s argument is clear: no army officer nor any judge or public servant can claim to have raped in the course of his duty. As in any case, the Court can be the best judge, based on available evidence, of whether a complaint is false or true. Why should the Government be allowed to decide whether a case is true or false – even before a Court has seen the evidence? No Ruchika Girotra or Soni Sori (molested by a police officer), Geetika Sharma or Rupam Pathak (raped by MLAs), or Thangjam Manorama (raped by army personnel) can expect justice under this ordinance!

Justice Verma has stipulated a punishment of 5 years imprisonment for failure to register an FIR or biased investigation, in order to instil fear of consequence in police personnel who fail to abide by the law. But the ordinance dilutes this to a mere 1 year, and so clearly sends a message of leniency out to the police. Also the ordinance refuses to punish a senior officer who orders or knowingly allows custodial rape by a police or army personnel.

The ordinance continues to insult women by referring to sexual violence as ‘outraging modesty.’ So, in courts, women who complain of violence will have to ‘prove’ their modesty’ in order to get the molester punished!

The ordinance fails to ban the demeaning and anti-women medical ‘two-finger test,’ whereby a doctor inserts two fingers into the rape survivor’s body in order to record whether or not she is ‘habituated to sex.’ So, it continues to allow the unjust question of a woman’s past sexual relationships to be brought into the rape trial.

The Budget Session of Parliament begins on February 21. The Government will seek to enact a law based on this shoddy and anti-women, anti-people ordinance – that will become a tool against women, girls and boys – rather than against perpetrators of sexual violence. It is up to us to build enough pressure on Government and Parliament, to tell them – we are watching you, and we demand a law as well as budgetary allocations based on the Justice Verma recommendations, not on the eyewash of the ordinance!

We demand that Parliament enact genuine, comprehensive, pro-women legislative changes based on the Justice Verma recommendations!

We demand budgetary allocations for rape crisis centres, more judges and courts to ensure speedier trials, safe houses for women facing violence in their homes, and forensic facilities! We want the Government’s Budget to spend on these things that women need – rather than gifting lakhs of crores to corporations as tax giveaways!

We demand reform to ensure accountability of the police and judiciary!

On February 21, the first day of the Budget Session of Parliament, we will begin a People’s Watch Over Parliament – do join, spread the word, bring your friends, colleagues, family! Contact us to join the campaign and help build support. See http://bekhaufazadi.blogspot.in/ for campaign materials, updates and campaign plans, and information about protest actions.