Working women condemn the Modi Govt’s promotion of jingoism and call it a ploy to distract attention from burning Issues!! 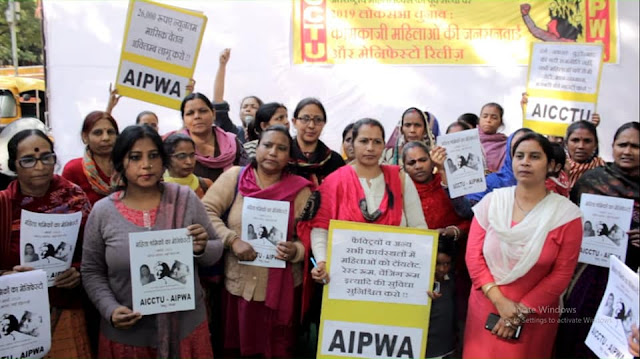 On the eve of International Womens’ Day today the All India Progressive Womens’ Association (AIPWA) and All India Central Council of Trade Unions (AICCTU) held a public hearing today at Jantar Mantar. Working women from all over Delhi and different sectors like sanitation workers, domestic workers, scheme workers, agricultural workers participated and spoke at the Public Hearing. The Public Hearing had a distinguished panel of jurists which included Prof. Tanika Sarkar, Historian, Dr. Uma Chakrabarti, Anumeha Yadav, journalist, Bhasha Singh, Journalist, Poonam Tusamad, Secretary, Dalit Lekhak Sangh, Dr. Uma Gupta, Assistant Professor DU and Democratic Teachers Initiative and Santosh Roy, Delhi State President of All India Central Council of Trade Unions. The hearing was conducted by Shweta Raj, Secretary of Delhi State AICCTU.
The Public Hearing was inaugurated by Prof Tanika Sarkar who spoke about the history of the International Womens Day and its socialist roots. She also condemned the attempts of the BJP/RSS to manufacture warmongering and jingoism and deflect attention from the burning issues of the country. The Public Hearing was addressed by working from different sectors. Com. Urmila, who is a santiatiin worker in JNU spoke at the Public Hearing and said, ‘As sanitation workers we often have to work in an environment which are extremely dirty and dangerous but we are not given any safety equipment. Modi goes around claiming the achievements ‘Swach Bharat’ but he has no time to enquire about the plight of sanitation workers, we have to work without minimum wages and in conditions which are dangerous ofr our lives.’
Com. Mala from the Domestic Workers Union in Noida said at the Public Hearing, ‘ As domestic workers we are never paid a minimum wage and are continuously humiliated by the people in whose house we work. Many residential colonies impose callous conditions on domestic workers and we often are frisked by male security guards in the residential colonies. Com. Rita General Secretary of the Delhi ASHA Karamchari Union said, ‘ As health workers we are often called to help at odd hours in the night, we have to be on call 24/7 but forget being paid a salary we are not even paid minimum wages. We have no social security. The Modi Govt has completely failed the scheme workers. Com. Shakuntala industrial worker from Wazirpur shared her experiences about the pathetic working conditions in Wazirpur industrial area.’
After hearing the testimonies of working women from the jury members were of the unanimous opinion that working women have to face the brunt of discriminatory working and pay conditions at the workplace. They also said that the Modi has completely failed in fulfilling its promises regarding scheme workers and providing them better working conditions and the BJP/RSS is foistering warmongering and jingosim to distract attention from the all round failures of the govt.
The Public hearing ended with a release of a Manifesto of Women Workers for 2019 Lok Sabha Elections.
#AICCTU #AIPWA