Why is the UPA Govt. not passing 33% Reservation Bill?

Why delay in introducing laws against Sexual Harassment and Sexual Assault?

Why does Sexual Harassment Bill exclude domestic workers and have discriminatory provisions like punishment for ‘false complaints’?

Why does the Budget have crores for corporates but dearth of funds for women’s nutrition and maternal health?

To mark 100 years of International Women's Day, women workers, students and professionals held a March and Public Meeting at Jantar Mantar (Parliament Street). The March was decorated with colourful banners and placards, and women raised slogans against discrimination, violence and oppression on women.

AIPWA observed 100 years of Women's Day all over the country, to remind that it was women workers of many countries, under the banner of revolutionary left organisations, who first began celebrating International Women's Day in 1911, demanding rights and equality at the workplace and the right to vote.

Shockingly, in UP which has witnessed a spate of crimes against women in recent times, women were assaulted by the police at many places in a bid to stop them celebrating Women's Day! At Pilibhit, hundreds of women marched to the district headquarters to raise their demands on the occasion of Women's Day, and were greeted by a heavy police force which told them that no Women's Day events would be allowed. They were beaten up by the police, and 14 women arrested, and released only after heavy bail amounts of Rs 15000 each were imposed on each, barring which they face jail in the next few days! In Devaria too, women were arrested as they gathered to celebrate Women's Day! In a state ruled by a woman CM, women celebrating Women's Day are arrested and assaulted...

In India in 2011, women workers still face severe discrimination, exploitation and insecurity at work. As Government cut back on jobs and fresh appointments, women workers are often faced with a doubled load. Those employed on contract or daily wagers are the worst exploited. If women raise their voice in protest, employers threaten to throw them out of the job. Domestic workers in cities are very often denied basic human rights – even the right to use the toilet in the homes and colonies in which they work. They often face immense cruelty, abuse and sexual harassment, yet the Bill on Sexual Harassment at the Workplace being proposed by the Government excludes domestic workers, in the name of the ‘sanctity of the home!’ The rich person's home is the poor woman's workplace, and domestic workers must be recognised as workers and guaranteed proper wages and rights, and justice against sexual harassment.

All over the country, violence against women, with many MLAs in UP and Bihar involved in rape, and many gang rape and blade attacks against women in Delhi. On 8 March itself, a college student of from Delhi University was shot dead in broad daylight. Sexual harassment and cyber crimes against women are also on the rise.

In spite of all the boasts of ‘8% growth rate’, it is shameful that India is amongst the five countries in the world with the worst maternal mortality rates, and more than half of India’s young women are malnourished and thousands of women die of anaemia. Yet the UPA Government’s Budget, which gives away Rs 5 lakh crores to corporates, claims to have no funds to increase ICDS coverage that can ensure women’s nutrition and health! The meagre increase in the ICDS program Rs 8996.64 cr to Rs 10404.68 cr, will go towards the increase in anganwadi workers’ wages to Rs 3000 – which is still less than minimum wages!

On Women's Day women asked - Why is the Govt dragging its feet on passing the 33% Reservation Bill, and laws against Sexual Harassment at the workplace and Sexual Assault? Why does the Sexual Harassment Bill have discriminatory provisions like a clause against ‘false complaints’? Women all over the country are being killed for the ‘crime’ of choosing their own life-partners, yet why is the UPA Govt. is refusing to pass a law against ‘honour’ crimes? Why are women being subjected to rape and state repression by security forces in Kashmir, the North East, Odisha, Chhattisgarh, Lalgarh and many other parts of the country?

The photos show women at Parliament Street in Delhi on Women's Day, as well as women students Chintu, Anjali, Raj Rani and Tahiba along with other students from DU performing a play to mark Women’s Day, women at Ranchi and Kolkata holding a March on Women's Day. 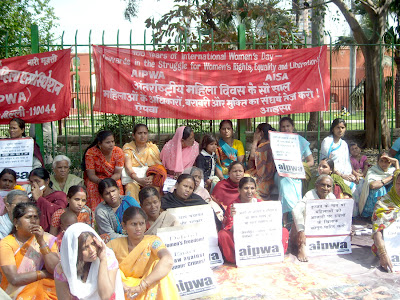 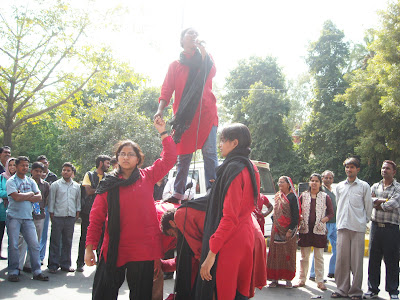 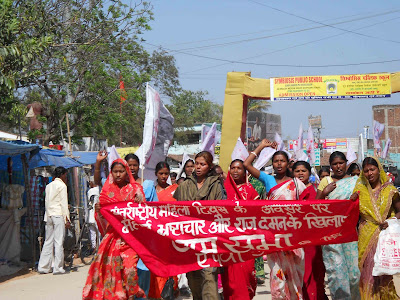 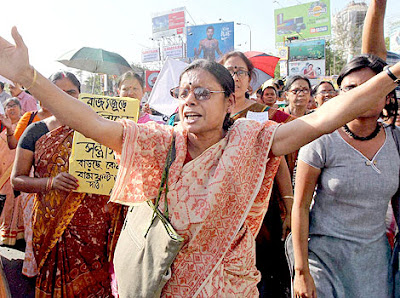