Thousands of women across India today responded to the call by All India Progressive Women's Association (AIPWA) for a one-day fast against hate and hunger on 23rd April.

AIPWA National President Rati Rao, General Secretary Meena Tiwari, Secretary Kavita Krishnan, and AIPWA presidents and secretaries of all States led the way by observing the fast in their own homes, holding placards and posters against the hate, untouchability and violence being unleashed in the name of Covid-19, and calling for women's rights and the rights of the poor and marginalised to be safeguarded during the lockdown. 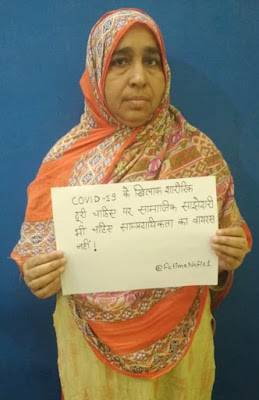 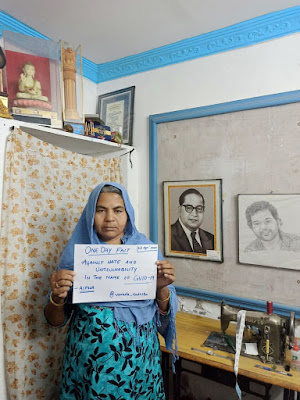 Women turned their own homes into dharna sites, asserting that while their movements are under lockdown to prevent the spread of Covid-19, their voices, minds and hearts are not locked down.

Women raised their voice against the untouchability and social boycott to which doctors, nurses, ASHA workers, sanitation workers, Covid-19 patients and their families, victims of Covid-19 including doctors, as well as Muslims are being subjected. They called out political leaders of the ruling BJP and TV anchors for fuelling hate and Islamophobia in the name of Covid-19. They highlighted instances of Hindu Muslim unity and shared humanity, where Muslim neighbours helped cremate Hindu neighbours during the lockdown. They called for justice for the Palghar lynching victims and an end to lynch mob culture and politics in India. They highlighted hunger and deprivation and domestic violence during the pandemic, and demanded rations for all and a domestic violence helpline across India.